Fund Portfolio Management - FPM have speculated on Treasury Secretary nominee, as at time of writing, Steven Mnuchin's motives circumstances and ethics, among other considerations, for assigning an insider-trading reputation, under the “NoSmokeWithoutFire:Of Reputation” investigative enterprise.

FPM's new millennium financial technology "fintech" enterprise seeks to arbitrate governance in the space of illegal insider trading, initially in the financial investment management sector. In the 21st Century, an age old white-collar corruption of capital markets for the benefit of the few and to the detriment of the many, CAN AND SHOULD BE ERADICATED. Insider trading with "non-public material information", creates an un-level playing field for the majority of stockholders in listed companies or corporations. Through exclusivity of procuring share-price moving information, a bias and distortion affects stock market buyers and sellers. Such "exclusivity" and extended to broader circumstances has contributed to  social wealth inequalities in the history of money-lending.

FPM's bold and honed challenge is to intervene in application of Rule 10b-5 of the US Securities Exchange Act of 1934 about illegal insider trading. The equivalent laws inherent in other global financial capital markets is also of great concern. The service FPM provide is especially for those institutional shareholders and indirect vested parties, that are perhaps unwittingly disadvantaged materially through insider trading. The privileged few insiders exchanging non-public material information about a stock-holding in their trading portfolio will by magnitudes make profit at the expense of majority of investors. Otherwise if everyone had had access to the same information at the same time everyone affected similarly. Most economic student are falsely taught from the beginning that this is the prevalent state through "Efficient Market Hypothesis" (EMH). While economic finance and investment students, and professionals alike are inducted to believe in efficient capital markets with "perfect" knowledge i.e. level playing field, for all participants; on closer inspection a merely illusory proposition termed "hypothesis" . That is it is merely theoretical of the expected and legal reality; whereas the "sharp practices" exist in reality.

The illicit insider trading parties benefit from the market participants as a whole reacting to an eventual public announcement, which moves the asset-price in question in a certain big-swing direction. The illicit traders were already positioned with their stock-holding to realise profit from the eventual and actual market announcement.

Say one is a pension investor holding Google stock (GOOG) in a portfolio, and was not privileged to have prior information, i.e. ahead of a share-price moving announcement by the company representatives.  While another hedge fund investor who was privy to the leaked-information of this announcement, through law-breaking means, can anticipate the degree of significant share-price swing and accordingly adjust his holding of Google to make a confident no-risk trading profit, for his portfolio investors. Whereas the former fair-trading pension investor may not have foresight or opportunity to reduce or increase his Google stock-holding, or otherwise sufficiently adjusted his portfolio, to benefit from the subsequent announcement and share price swing. FPM strongly believe that without a level playing field in the investment management industry for long-term savers, there exists a two-tier system of returns; the superior savers' return system is the one through which  stealing of inside information information is the edge.

Specifically pertaining to an investigation action, Mr Mnuchin moved the markets as recently as 29th November 2016, when share prices of “Fannie Mae” and “Freddie Mac” spiked up some 30%. The speculative question is whether his material public announcement or speech was also made earlier and privately to a few investors? If Mr Mnuchin gave his former investment trading colleagues, at ESL for example, an information edge prior to public speaking, then this can potentially compromise his integrity. FPM say “potentially” because of the technical burden of legally proving malfeasance is onerous presently. “Fannie” and “Freddie” are investor's cant for stock market listed Government Sponsored Enterprises (GSEs), a quasi Government and private-sector entity backing American house mortgage loans. 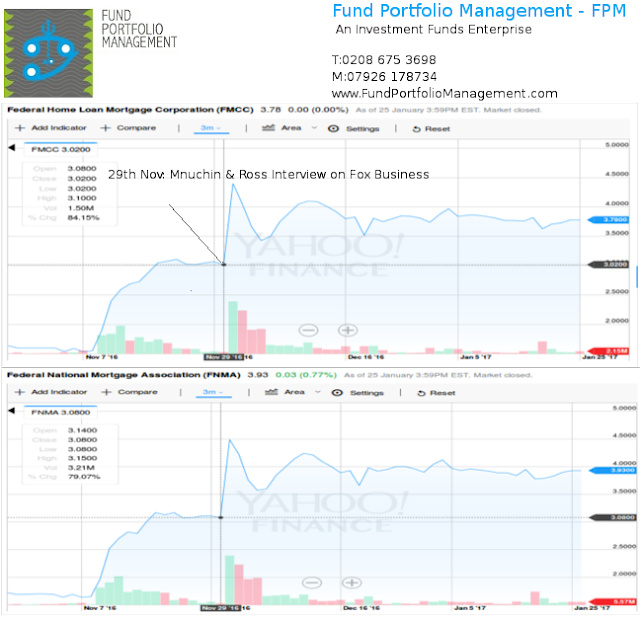 The share-price spike as depicted in above diagram was based on traders and analysts speculation. Betting that Mr Mnuchin, supporting his nomination for Treasury, had suggested that the housing focused and taxpayer-backed GSEs, struggling since the financial crisis of 2007-08, might be restructured and “privatized”.  What he had said, which created the sharp uplift in “Fannie" and “Freddie” share prices in November, is shown below:

"We got to get Fannie and Freddie out of Government ownerships, it makes no sense that [the two federal mortgage agencies] are owned by the government and have been controlled by the government for as long as they have." Speaking to Fox Business Network’s Maria Bartiromo on 29-Nov-2016.

This surge in related shares price settled down, and on 19th January 2017, at the Financial Committee confirmation hearing for Mr Mnuchin's candiditure for Treasury chief, he clarified his comments about the two quasi public-private mortgage agencies:

"My comments were never that there should be recap and release."


Shares of Fannie and Freddie sold-off around 11% in the minutes after Mnuchin made his comments - both recovered a bit by close. FPM wonders if that was interpreted by investors as political double-speak denial for exactly the opposite which the Treasury under Mnuchin is expected to do under its top 10 priority? Since that Finance Committe confirmation hearing rebuttal of “recap and release”, the two GSEs have surprisingly resumed an uptrend in share-price.

Under the heading of “Where The Wind Blows”, FPM's adduced assessment of which organisations and individuals are involved in insider trading, is speculatively framed. In Mnuchin's case, using internet and its subscription resources such as Muckety interactive relationship mapping, we know straightaway that Goldman Sachs, Edward Lampert's ESL Investments, and alumni of his failed hedge fund, Dune Capital could potentially be tipped-off, ahead of share-price moving public statements. Further opportunity for insider-trading would be afforded by the public-relations lobby group connected to very inflential people, corporations and sovereign-state clients, Patton Boggs, LLP.

Our presumptive spotlight for financial market malfeasance falls on William Ackman of hedge fund Pershing Square Capital Management. Fannie and Freddie are large positions of Mr Ackman’s Pershing Square, who suspiciously converted to a Trump fan right after the election! On the 10-Nov-16, 2 days after the election of Donald Trump as President of the USA, Mr Ackman made this statement at a press conference organised by New York Time:

"I think Fannie and Freddie are going to get resolved in the first 12 months of this new administration, and I'm looking forward to having my second meeting with Donald Trump and negotiating a deal...” William Ackman of Pershing Square Capital on days after Trump election.

Another set of illuminaries and cabal hunting as pack-of-wolves are highlighted in “Moving Markets Mnuchin Style”. They are hedge funds who have openly welcomed privatising the now profitable public entity which as public-private concerns the two GSEs cost the taxpayer $188 bn to rescue at the height of the financial crisis, despite reports that taxpayer bailout have being repaid in 2013/14. These billionaire financiers attacking in pack like wolves, tended to have power under politics-for-sale and policies-for-donations operandi  of recent successive USA adminstrations. We will keep tabs on "Tumpet-Trump" to see if he will take on wolves that include Bruce Berkowitz (Fairholme Capital), Richard Perry and Mnuchin’s pal and ex-partner, John Paulson. Add to this list Carl Icahn, "a longtime business Trump Friend and business partner, has invested $50 mn in Fannie and Freddie"

Further stage of FPM insider-trading ratings research, would come under template heading “Spreading Like Wildfire”. This would be related to Mnuchin's reputation from previous mentioned "where the smoke blows" identification of his past and present working and personal relationships. Spotting Mnuchin's relationships with motive and opportunity in their profile (indicated e.g. by past loose practice codes in relation to ethics, greed, morality and humanity), starkly points to another close associate of Mnuchin, Edward Scott Lampert, of the mentioned eponymous hedge fund ESL Investments.

In short ESL is the largest shareholder of the famous Sears Department retails stores which had merged with equally historical “K-Mart” stores under difficult times. However, the storied Sears now synonymous in reputation as Edward “Sears” Lampert, since he is its decade-long chief executive and chairman. At least one commentator  has questioned Mr Lampert's role as Sear's hedge-fund stockholder and the store's chief executive Chairman (“His dual roles give him inside information that motivates his actions.”). See the 2-years stock price chart below, compared with benchmarks “retail – consumer discretionary” and “retail – consumer staples” to see the declining and unarrested fall of this retail giant of America:

FPM's greater critical rating, as opposed to corporate “mainstream media muppets” dubbing as the next “the next Warren Buffett” is not based on agenda; which we at FPM know in hedge-fund terms of shorting, leverage, CDS and other means of disaster-capitalism that our review degree reputation for Mr Lampert is Eddie “Sears-Stealing” Lampoon”. This NSWF:Reputation degree has double-edged meaning too; especially when we balance a Zerohedge narrative “Sears Kept Alive by itsCEO, Eddie Lampert, Again” on 29-Dec-16.

In relation to Mnuchin's interview and market moving comment about housing-backers Fredie and Fannie, we know Mr Lampert is reputedly asset-stripping Sears department and former Kmart stores for its real-estate value. So this bad-boys link, as well as Mnuchin's connection as Director of Sears Holding Corporation, places them at the scene of the crime shown in the ruination price chart of Sears above.

Inexorably, for exploring the investigative focus, we also note than another of President Trump's nomination, for health secretary Tom Price, had a confirmation hearing discussing links to insider-trading. FPM won't elaborate on this “wildfire” of insider-trading but point to research by staff at “Crooks and Liars” - a website service. To access that by them story click on the link provided.

How Bill Ackman Scrambled To Acquire Over $3 Billion In
AllerganCalls Knowing Valeant Would Submit A Bid
Posted by KKSiva at 22:25