The observations about hedge fund strategies and their risk-return performance, as cited in FPM's last analysis of 17th January, was extracted from the full list. Our full list analysis of hedge fund strategies, using Hedge Fund Research Inc data, over the past the past 3-years and 5-years windows, includes 32 benchmarks and their sub-indices. From many requests we publish below our hedge fund sector comparison,  showing performance for the 3 periods since the financial crisis, which we term as The Bad Times, The Good and Bad Times and The Good Times.


PLEASE NOTE: Requests for the full list qualitative assessment and implications for hedge fund portfolio re-balancing is only available on payment of small material consideration. Contact Kristian for report on: kks@fundportfoliomanagement.com

Double-Click on The Images Below To Zoom 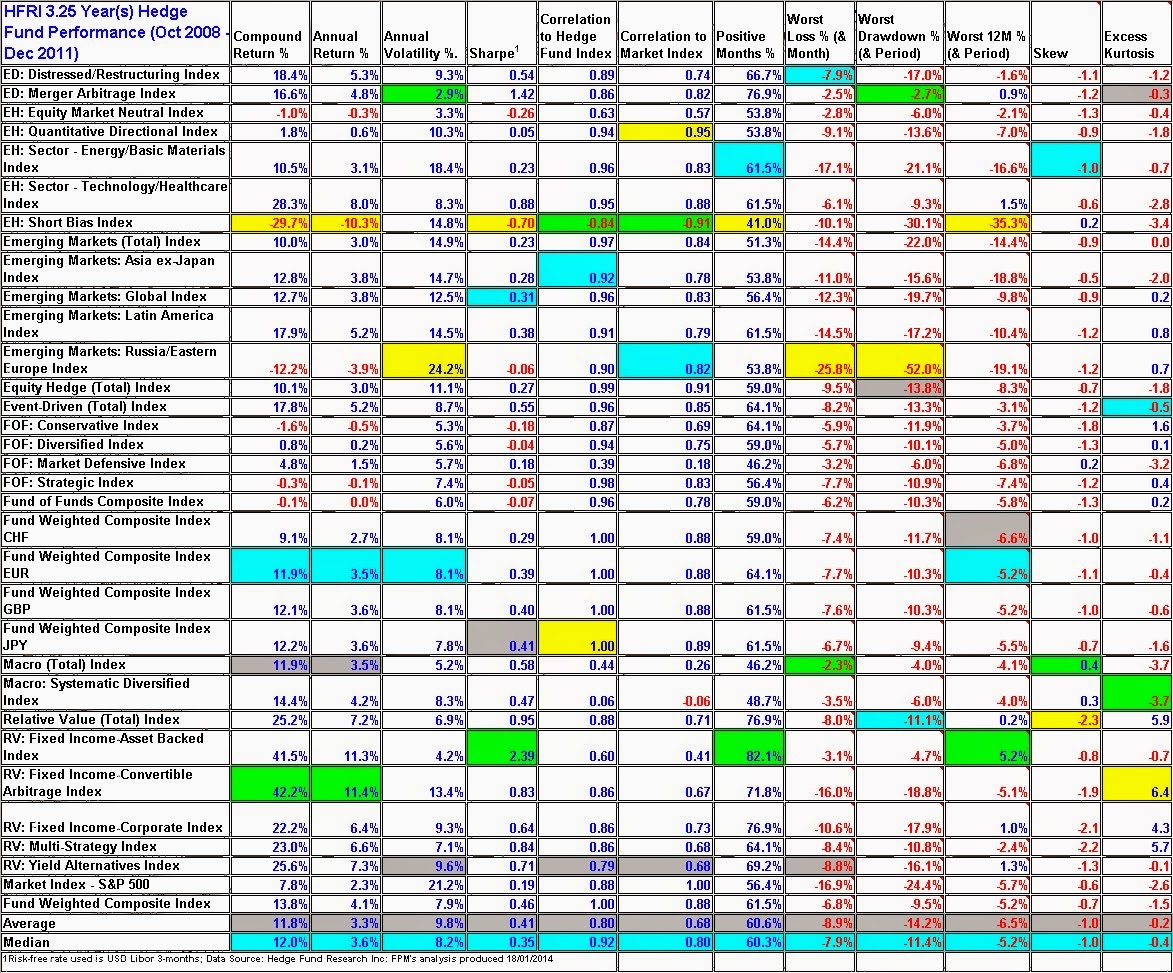 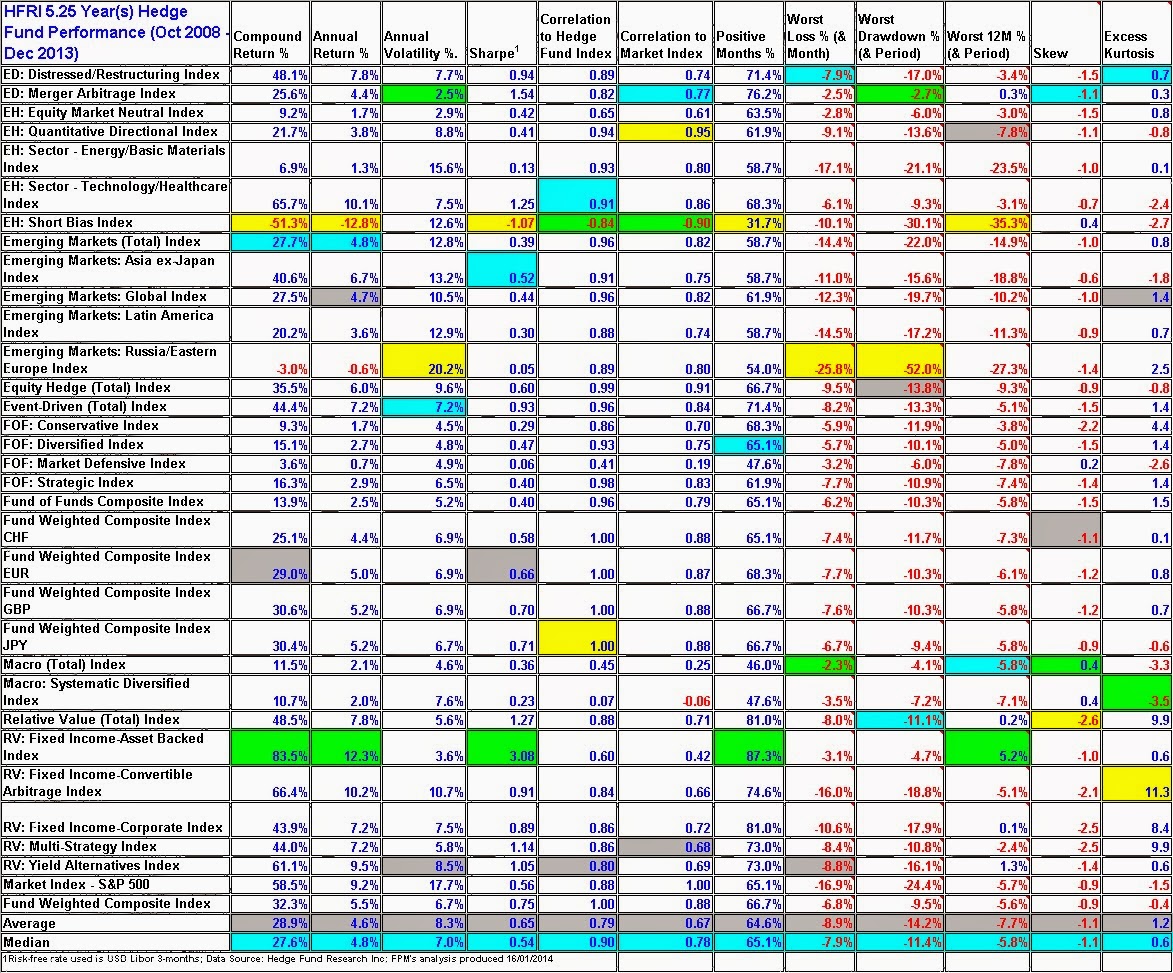 The Good and Bad Times 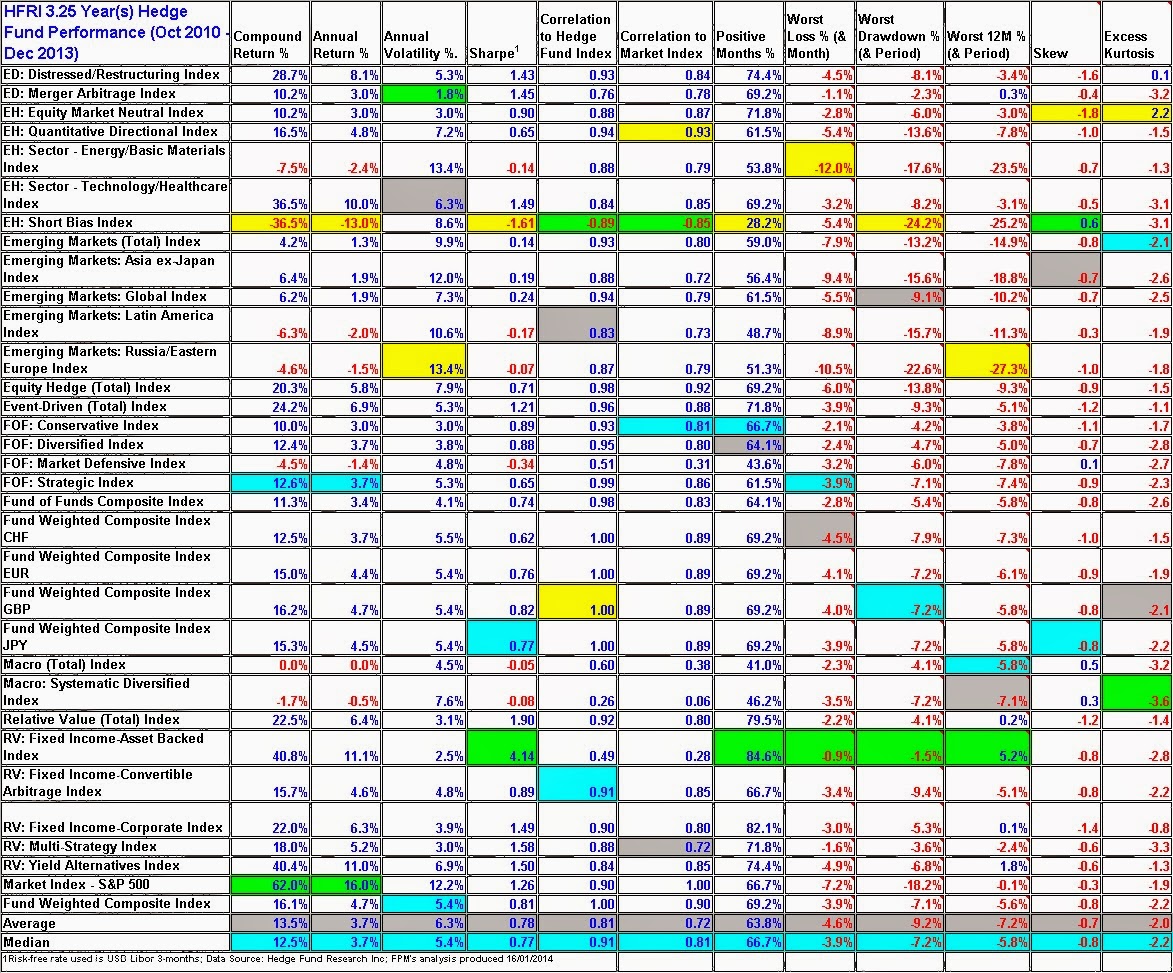 Observation of quantitative metrics and the qualitative conclusions we draw from them is the cornerstone of any good analysis, in whichever field of application. Equally ass important is the window of analysis, i.e. the period/s observed. FPM considers the 5 and 3 years performance period of hedge fund strategies as averaged by HFRI, an index provider benchmarking hedge fund performance. We extended these choice periods to include trailing performance data for the last 3 months of the starting year. In actuality we do not use the clean January to December as an annual period. In this extended window started from Oct 2008 and October 2010, for 5 years and 3 years windows respectively, we believe we incorporate both year-end ‘window dressing’ performance boost and early yearend profit-taking and consolidation in weak capital market years. 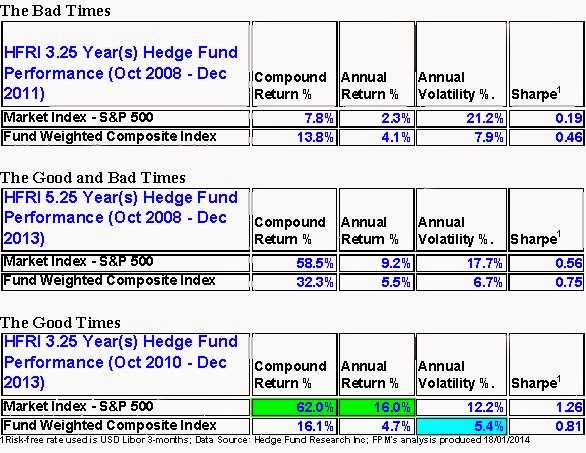 Our performance snapshots of 3-periods as above, of HFRI Hedge Fund Weighted Composite Index and market proxy S+P 500, shows equity markets reflecting economic recovery in recent years, “The Good Times”. First table is a painful reminder of The Bad Times from Lehman and March 2009 lows - less said the better! he second table above reflecting ‘5.25’ years of performance negatively includes the last major market low of March 2009, “The Good and Bad Times”.

Stark Point: The relative indifferent performance of hedge funds over the Good Times is an observation for elaboration. The hedge fund allocation proposition over weak and declining markets seemed justifiable after compounding 32.3% over The Good and Bad Times. Yet in steadily recovering equity markets with low volatility since 4Q11, the hedge fund proposition seems to be blowing ‘hot air’ i.e. no absolute substance; compounding at a mere 16.1% (annualised at 4.7%) over the three and quarter years to end-December 2013!

FPM portfolio strategy has always been to suggest balanced portfolio. The extent of being “balanced” is at the financial savvy of the experienced portfolio overseers. We have indeed been advocating “Core-Satellite” approach as our veritable performance kicker strategy on the premise of a 10-year realistic recovery cycle since the “Great Recession”. We have expounded this top-down portfolio composition strategies to our Middle Eastern allocators including SAMBA Financial Group. Who consider it too intensive to bother about as SME hedge funds to park a minimum US$ 7 mn proprietary money. Talk about job creation in financial services! 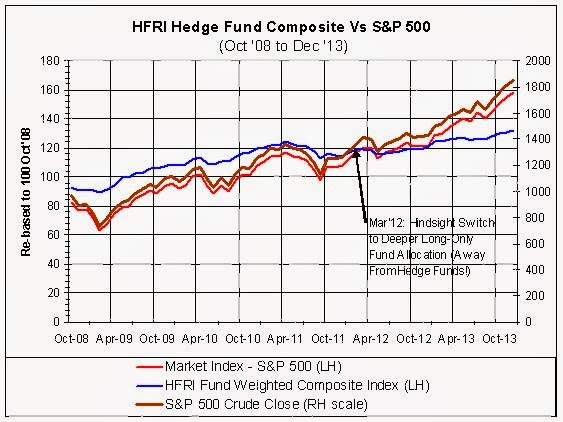 Our pictorial depiction above, shows how FPM would have increased weighting to equity and other long-only mutual funds, exchange traded funds, closed-end funds etc - other things being equal. The catch-all caveat would be based on our economic and market outlook. In the nature of hindsight we can obviously see this “switch weighting”. In the same way we are looking forward for signals as foresight. FPM believes the last 2-3 years of benign markets scarred with the odd flash crash augurs a meaningful correction this year and into 1Q15, cyclically predicted.

Macro and Markets – An Outlook

Along with the Federal Reserve we cite unemployment as a major drag, even though confidence boosting numbers shows an improving circumstances, but the reality is the old trick of statistics being used for untruths. Just witness any critical blog on the Federal jobs numbers to see the extent of confidence boosting manipulation of the data.

Less of a drag factor on the economy for the countries with their own prominent currencies, like the US, UK and Japan, Switzerland etc, is the eventual onset of inflation tendencies. While inflation is already a concern for emerging markets or developing countries with stronger growth potential and more fundamental monetarism linked to exchange rate and interest rate tweaking policies.

Economic fundamentals such as jobs and deflation continues to dampen growth prospects, which are also structural in nature in developed nations, FPM anticipates cataclysmic event/s bring about a meaningful capital markets correction. News of toxic subprime had less impact as a catalyst for the Great Recession than did Lehman Bank’s demise in late 2008. To herald such turbulent outcomes we quote a timely Gordon Gekko below (as The Wolf of Wall Street is on general release in cinemas):

“We make the rules, pal. The news, war, peace, famine, upheaval, the price per paperclip. We pick that rabbit out of the hat while everybody sits out there wondering how the hell we did it.” Gordon Gekko, “Wall Street”, 1987

With that in mind, to imaginatively pick a cataclysmic economic and market shock event we see debt default by a leading developed country or countries. Our disaster scenario does not preclude large corporations, like the US’s largest borrower General Electric Co. (GE) going belly-up. The lending division GE Capital had about US$ 229 bn of debt, greater than 20x the liability at the consolidated group level. We are already seeing “begging- bowl” borrowing to keep afloat in some of the fringe companies / countries, e.g. in the European Union. Thus far, either news-managed as insignificant without market shock and / or b) orderly and timely solutions have been set-out by authorities. Viz, US shutdown in October last year for 16 days and at the same time Reuters reported: “The government also came close to breaching its borrowing limit, which compounded the crisis and could have pushed the country closer to a historic debt default.”

In our February 2013 preview of macro and market fortunes in Investment Sector Outlook for 2013: “Credit is a Lover on the Re-bound?” FPM’s opening gambit was “FPM considers the macro speculation that policy makers’ credit cycle stimulus is in musical terms at a moderata end in 2013…”. The euphemistic “tapering” jargon has taken grip to symbolize that which FPM predicted. FPM is in-the-money for sure!

Strategically and selectively FPM are swerving away from large institutional hedge funds, they are not only a misnomer as core of their portfolio can resemble any other long-only Vanguard-like fund, but ultimately producing strategy average returns or in some cases underperforming beta returns. Too illustrate this, compare top 10 holdings of hedge funds via SEC 13F filings and a mutual fund constituents. SNAP! The household names stocks are too similar in the large hedge fund portfolios to represent actively managed absolute alpha generation. The audacious cheek of those hedge fund fees when hedge funds become large asset gatherers!

Aside of the principle that small is beautiful in hedge funds, we still hark and marvel the risk-return performance of the Relative Value Fixed Income – Asset Backed Index, as extracted below. Annualising 12.3% return since beginning of October 2008. Remember that month alone the S+P 500 plummeted 17% plus a further 7.5% the following month November.

Of the 32 HFRI hedge fund indices and the S+P 500 which we compared this asset-backed strategy has consistently outperformed. Apparently those hard-to-value referenced debt pools are majority still performing-loans with the help of Uncle Sam’s restructuring incentives and artificially-stalled interest rates etcetera.  We identified funds and managers in this stellar segment of hedge funds in our September 2011 post “Credit Markets @ Workout Inflexion Point”. Under our traffic light scoring system this strategy gets “Green for Go” against 5 metrics, including best Sharpe Ratio! In film parlance as at this time of year, the strategy has gained the equivalent of 5 Oscars Awards - the most among 32 hedge fund benchmarks!
Included among these benchmarks is the Relative Value (Total) Index, which itself annualised 7.5%. The “Total” index is composed of sub-segments such as convertible arbitrage. As a an aside, this article writer recommended convertible arbitrage to his then manager, when writer last worked at an institutional hedge fund administrator.

Apart from the listed relative value strategies other top compounding hedge fund sectors are presented below as “The Next Top 5” from the past 5+ years investments.

Not surprisingly and close behind was the US Dollar denominated hedge fund proxy “Fund Weighted Composite Index” compounding 32.3%. Of these classic strategies, yet dubbed alternative, we noticed the absence of Macro strategies. Clearly these guys were mostly beguiled and flummoxed by the unprecedented flux in policy issuance from co-ordinated global governments in the last 2 years. FPM have noted in its 5-years hedge fund performance review to end-March 2012, that Macro investing was then the strongest performing strategy over the financial crisis. A more critical assessment suggests not only were macro managers’ economic strategy skewed but that their trading practices, stop-losses and technical trend-following also got awry.

Mitigating macro forecasters’ recent poor showing is the humongous and alarming extent to which transfer of public wealth to private financial concerns resuscitated the economy. The scale to which the Federal Reserve alone has increased its balance sheet to approximately $4 trillion could not arguably have been conceived by many policy watchers. Whether we can navigate through impending storms with normalised policy response, i.e. without the crowding-out effect of government purchasing its own Treasurys and mortgage-backed securities, is FPM evince our debt default scenario.
Posted by KKSiva at 23:48 No comments: