The Search for Alpha: Soros of the Euro?

We know hedge fund managers are out there but are they "really out there", say with with a macro play to break-up the Eurozone's common currency the Euro? Like the one George Soros spearheaded causing the exit of the British Sterling from the European Exchanage Rate Mechanism in 1992?

It's pertinent question for all money managers following the 3-pronged EU deal this week to address the uncertainties about the Euro debt / currency crisis:

1) Leverage the European Finance Stability Facility (from Euro 440 bn to Euro 1 trillion+).
2) Recapitalise the Banks to withstand provisions for debt losses.
3)  Debt relief for of 50% from private sector debt holders.

The macro play is also pertinently linked to concerns about the the validity of alpha creation and generation in the hedge fund and wider alternatives space. That is, do managers herd around common  trades, or do they go out on a limb with research or applying other edge?

George Soros, the billionaire hedge fund investor, renowned for his macro trade of betting against the British Sterling is well documented. What may now be mere detail and packaged neatly into the recess of memory as "Black Wednesday" should have resonance as an important lesson for today. The interpretation that the British pound was  deigned as overvalued in its entry into the ERM, from macro fundamentals research, was something that eventually undid the Bank of England. Earning Mr Soros the title of "the Man Who Broke the Bank of ", for making the astute judgement and wager, which reportedly earned him $1 billion dollars.

Similarly, 's entry into Eurozone was under false premise about its fiscal deficit, which was understated by as much as half of 's actual debt. Whether ’s entry was politically and discretely made expedient is for the regulators and other investigators. This malfeasance with Greek ascendancy to Eurozone membership did come to light and the 'truth outted', plunging   into ongoing exacerbated currency and debt difficulties. Not to mention the spectacle provided for the public and media by the Germans and Greeks to exonerate any suspicion of misdemeanours (see picture below). 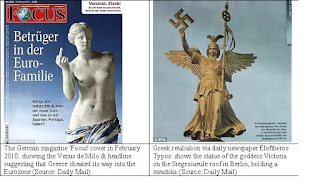 From even basic / preliminary research and insight, FPM understand there are strong possibilities for Euro restructuring i.e. of countries exiting and entering the status quo 17 member common currency union within the next 1-2 years (yes the art of forecasting is to indeed tell both the date and event not just either / or!). And over a longer horizon, that an eventual complete break-up of disparate countries making up the European Union is a probability. FPM is of the summary view that EU has once again kicked the real issues of Euro currency and debt into the long grass, through its latest bail-out plans. The 3-pronged response of the EU (listed above) awaits a few days’ market reaction before setting-in-stone the announcement at the G20 summit in on November 4, 2011. The market reaction was not good, as few days after the Greece-fix, ’s borrowing costs hit record highs. The next target for bond vigilantes since debt default is seemingly shored-up – a pyrrhic victory.

Before emerging markets’ currencies were forced to devalue often it was preceded by an IMF-prescribed attempt to restructure internal and external deficits while the country’s central bank defended its exchange rates. Extrapolating from such market behaviour, the saga is a prelude to the single currency restructure, with ironically now stronger emerging markets countries such as   invited to contribute to the improved EFSF!


Two op-eds in the Financial Times in February 2010 serve as an FPM research benchmark for its views. The first article is by Ottmar Issing, described as “one of the fathers of the euro”, entitled Europe cannot afford to rescue Greece and the other is by Mr Soros entitled The euro will face bigger tests than Greece.

Without concerning this FPM thought piece further about the multitude of factors surrounding the Euro's break-up or restructuring possibilities, the other point of this article, as hinted in the investment feasibility note, is indeed whether there are bona-fide hedge fund managers with a long-term fundamental alpha strategies? The Euro currency break-up would be great alpha play in the creative-destruction mode. FPM expected and understands the windfall short-term trading flows on Euro policy news. Demonstrating alpha capture or simply independent thinking, global debt problems was initially unravelled by the US-housing bubble bursting through subprime sector activism by John Paulson et al.

There have been many numerous researches about hedge fund managers not seeking or capturing real alpha, and that most hedge funds are really beta in alpha clothing, with simple crowding around particular themes and plays. This paradox even questions whether active management is indeed occurring, as opposed to “closet trackers”. Please refer to excellent truth-outting investigative journalism “Don’t believe the fund manager’s hype” by Alice Ross writing in a weekend FT Money supplement in the Serious Money section.

A caveat about the much touted link between hedge funds and alpha, is that traditional long-only portfolio managers may also seek alpha strategies, or simply lead or stand-out from the investment herds. Unashamedly Bill Gross, manager of the world’s largest bond fund ($242 bn FuM) for Pimco - a subsidiary of Allianz group of companies, was on record as wagering on a rise in US interest rates this year 2011. Though this contrarian view contributed to 10 months of poor performance and hardly representing alpha-type returns, such a leading bond investor can take an “out there” view – even if on this occasion a wrong-way bet. Since Operation Twist, of Federal Reserve policy of controlling long-money rates, Mr Gross is betting on falling interest rates.

FPM draw parallels between the evolving hedge fund industry  and the investment era at the beginning of the current Millennium. At the turn of the centuary the investment bandwagon to ride was all things "dot.com" related. An example folly of this era was when Time Warner, a respectable giant media corporation, merged with the then new and highly valued e-commerce company Aol.com. The merged company changed its name even to AOL Time Warner (Editor's texting moniker: ROFL!). In a similar way there are many new and emerging asset managers jumping on the "hedge fund" bandwagon.  Considering negatives, these emerging managers may be mere “me-too” players. The positive potential in these emergent managers may be to discover a unique long-term trade and attribute their name to it.  Actually discovering a novel strategy in their investment process and generating alpha would set themselves up in the premier league of instutionalised hedge funds. As John Paulson did with Paulson & Co., betting on the subprime before this financial crisis.

As a final citation about the state of hedge funds and the character of the principals behind them and subsequent investment strategies, I defer to FPM’s select gurus of hedge funds, Ray Dalio of Bridgewater Associates. In his long presentation I refer to his comments from 3.20 minutes onwards about independent thinking and alpha.

Also, this article is not simply posing a rhetorical or hypothetical question but an actual one – please email FPM (fpm@talktalk.net) if you are, or know managers, with the Euro break-up as long-term macro strategy. Who’s really out there?
Posted by KKSiva at 19:38 No comments: