The Economics Of Triumphantlism - Trump

For a country, or for that matter an individual at a time upheaval in mans' migration, to triumph as a Western Democracy is great indeed; yet originally the triumphant players were forces at war against other equally rapacious entities. Today and certainly since World War II attempts to conquer EVERYTHING under various "globalism" umbrella is tantamount to supremacy borne out of insatiable greed for power and possession. A psychology of a creed of men which is not best described as merely megalomaniac, as is often distorted in the tawdry popular media, but "monomaniac". See classic dictionary definition below:


Only a few nations or countries have achieved significant global ambitions over the milennia. Nowadays we can call some of these nations as members of the Group of Seven or "G7" countries, or "G5" countries. Of individuals, which can extend this topic to, since individuals possess wealth (and therefore power) greater than that of countries, who have achieved global reach in business and other field of aspirations e.g. Hollywood actors, maybe  be termed the "1%" for vogue sake. More later.

We have witnessed such phenomena of conquest and rule in many guises throughout the millenniums. Not just initially colonizing neighbouring villages as marauders, but eventually taking over whole regions of a country. This all-consuming purposeful "greed" is the super-powers' sickness and its eventual tumultous downfall. The fact of eventual decline and downfall facing these supremacist nations and their leading conspirators is evident in history (in black-and-white text and nowadays in bright multi-colored spectrum vision - er internet!) has changed little, to date. These superstate nations' overwhelming dominance has now not only translated into historic domestic mastery of its population; that is, society organised as slaves and fiefdoms, but also into a template model for international scope assimilation and exploitation.

Just as megalithic Dinosaurs, Indus Valley, Mesopotamian, Greek, Roman etc etc civilizations and creed came conquered and they themselves vanquished into oblivion - one can adumberate / adduce outcome for the in mode hegemony or superpower. This free form narrative propounds capitalism facing the decimation fate, or at least decline, perhaps in our life-times.

What is often called by capitalists as "greed" and described euphemistically as "economic bubbles" is the phenomena of deliberate overreach and what is term "crash recession depression bust" is the inevitable extinction or deflation of most hubristic events, acts and entities. As discovered from historical decline and fall of empires; and more broadly of any anthropological entities' life-cycle. In classical Greek mythological terms "hubris" and the story of Icarus.

Dumbed-down indoctrinated economists and other purveyors know this creative-destruction  as "boom and bust cycles". But these economic theories and education-establishment preached vocabulary wittingly or otherwise dissemble more sinister dark and ashamed features of the human intellect and social existence;, as little known esoteric understanding.

Indian spiritualist called this life-force cycle Brahama, Vishnu and Siva - the original name for the Holy Trinity of Creation, Preservation and Destruction. It got distorted to Biblical proportions in the Middle East. A universal triumvirate of life-cycle disseminated in many forms of religion and in many other templates. Joseph Schumpter, an economist of genuine integrity, at least in this authour's perception, we believe coined the phrase "creative-destruction".

Applying the spiritual Siva or "The Way of The Left Hand" - in Sanskrit scriptures "Vamachara" - we analyse today's last speech of the year by Mario Draghi, the head of the European Central bank. The "Satan-eyes Impresario Mario" charged with maintaining the facade of a crumbling new citadel, i.e. the European Union, via vital financial management. Some say an expanded European Union is the first pillar of Zionists agenda to "inherit the earth" (also known as One World Government / New Word Order) or some such garbage from the Semite story telling hypocrisies.

As stories and narratives have been imposed on a wider more unsuspecting innocent populous for milennia's, we at Fund Portfolio Management decided to interpret one. Our analysis has been "geopolitics" in context of global macro fundamental economic flux (Triumphant Trump Card and Great British Brexit). So FPM pseudonym 'Fred'  read between the lines of the captive of the international capitalist creed doing his life-threatened life works  speech on 28th November 2016 to Committee on Economic and Monetary Affairs of The European Parliament: 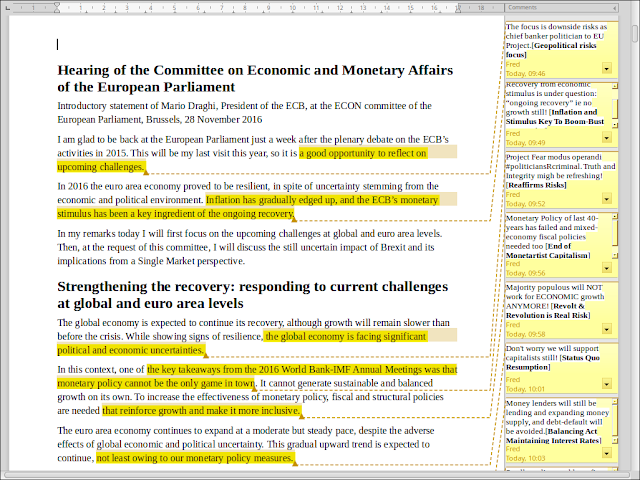 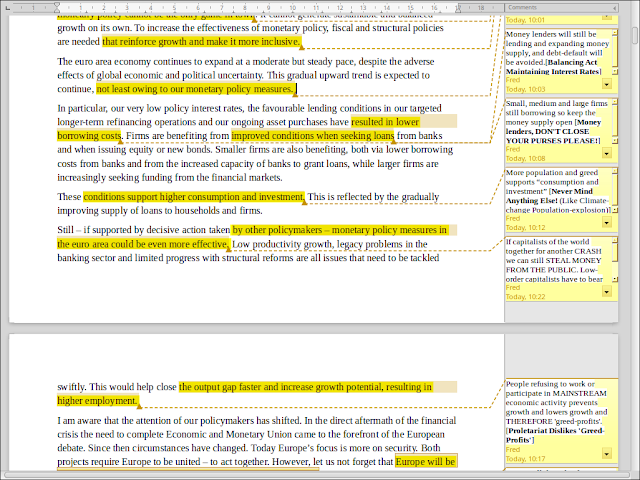 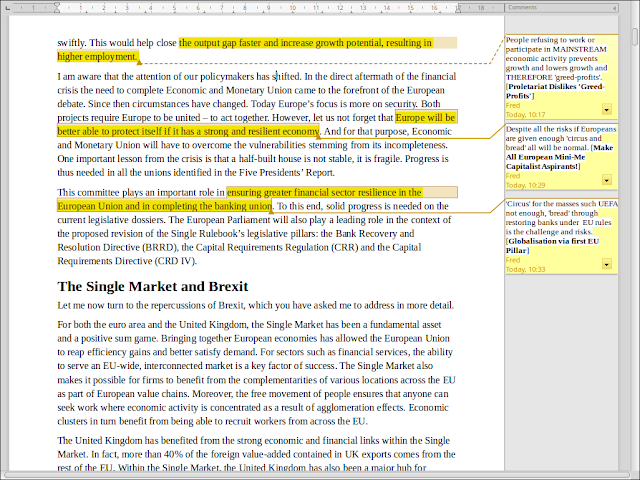 FPM has long believed the EU project doomed to failure, for many many reasons, not least as the epicentre of hypocrisy responsible for genocide and other human evils. What has transpired since the industrial revolution, and that which must face an age of decimation destruction or reformation is perhaps here with last financial bubble bursting in 2007-2008...