FPM’s ‘NoSmokeWithoutFire:Reputation’ propagating enterprise is researching prospective ring leader Neuberger Berman Group LLC (an independent employee-owned investment firm established in 1939) and its investment affiliates for signs of illegal capitalism. Since our illuminating investigation into insider trading by Steven A. Cohen’s eponymous SAC Capital, and involvement of Blackstone Group as its biggest investor, we have compiled public domain surveys, and presented privately commissioned ratings of an entity’s reputation by degrees. This monitoring survey is mockingly entitled 'Potential Rogues And Affiliates Trading' - as below. 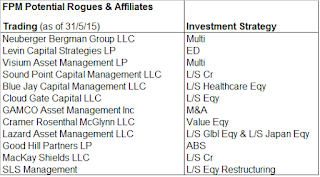 The rationale for organising and connecting Neuberger Bergman – "NB" affiliate map are manifold. One rationale we look at here in depth derives from the nature and contradiction of a class of investment funds known as ‘liquid alternatives’. Namely, “Neuberger Berman Absolute Return Multi-Manager Fund” ,


Indeed like the mentioned early days of Blackstone Group, there is a private equity division of Neuberger Bergman known as Dyal Capital Partners which sponsors emerging and existing hedge funds via stakeholding. As far as we can tell there are no cross-over holdings between Dyal and the NB liquid alternative mutual fund. FPM is familiar with the co-heads of that business having worked with the team in their former guise as a Lehman Brother division. This is food for monitoring ‘Alt M&A’ transactions. This corporate finance / rain-maker / deal activity is expected to be invigorated during the cyclical ‘shake-out’ from the next capital market turbulence [of a nature and type never seen before].


Our third proposition for citing NB is their long established heraldry in US finance and industrialism, through its CEO, George H. Walker the fourth. Who is the second cousin of George W. Bush, the last US president from that American dynastic family. FPM believe there are bound to be scrutable executive connections to feed through our ©NSWF:Reputation rating of corruption in crony capitalism.

FPM have a stuff and nonsense view of liquid alternative investments. A category with an estimated US$234 bn[1] of monies invested must have an investment rational merely for its existence. However, the terms ‘absolute return’ fused with ‘mutual fund’ is a misnomer and contradictory by their original natures, which FPM invoke as simply ‘convergence’ of traditional long-only investments with edgier fandangled branded alternative investment category i.e. hedge funds. This confusion with nomenclature is asserted to investors as liquid alternatives.

Nothing about this NB multi-manager fund is reminiscent of a fund of hedge funds and the implied premise of absolute returns. It is at first glance merely an appeasement offering, like water for chocolate, as far as investors are concerned. Don’t take our word for it, look at the price action in Yahoo chart below since launch. And if you believe the smarter investors should be institutions rather than individuals then it was reported that only 20% of the fund’s investors are institutions.

Additionally, the real proof of a vehicle with ‘Absolute Return’ in its name should be stellar hedge fund performance. Yet average annualized returns of 5% over its three years existence is not a significant or remarkable track record, even in an era of zero cost-of-money, and beating the average hedge fund benchmark - See table above. Veritably the tell tale signs of the multi-manager vehicle is the convergence of active management alpha-seeking strategies with passively managed beta-tracking. The real raison d’etre for this fund is the way Neuberger Bergman allocates the fund investor’s money between its hand-picked hedge fund affiliates. NB has segregated account with each of its portfolio constituent manager, and therefore has look-through potency at the portfolio companies. This has many potential alternate alpha-return interpretations, least of all of them being to reduce investors’ operational risk!
[1] Strategic Insight – New York based mutual fund research