FPM awarded disingenuous or mistaken journalists of the mainstream financial press "MSM Murdoch Muppets" degree and incumbent self-serving politicians pandering paymasters as reputedly "politiciansRcriminals" degree. The political economy we find now, at the turn of another new milieu, has given free field to anti-capitalism, trade unions activism and left-wing political radicalism. While we may have generalised about the character of politicians, financiers and media people - we naturally believe that their utilitarianism in an aged mature organisation of socio-economic order, ultimately carved out by politicians and legislators, calls for social and economic revolutions.


Similar to drug-testing of professional cyclists, such as at the recent Tour d'France, where the winning Sky Team (sponsored by Rupert Murdoch's media empire) are avowing full transparency to vindicate that their sponsored winner (Chris Froome) and team ARE probably drug-free; not withstanding lies of statistics! Most of the public and ex-professionals are cynical that anyone in the top-order of cyclist race finishers are NOT on drugs team (unless presumably he was Superman). Onus of proof has shifted: in cycling it is assumed you're a professional vested drug-cheat unless otherwise proven.

Hence FPM predominantly turn to other sources for fundamental FPM's macro and markets analysis. In the “new alternative media” – NAM, which we contrast with traditional media-mogul owned / funded main stream media - MSM, we like innovative technology enabled internet sources and their breaking-the-set commentators.

Below we feature one such truth-buster, Dr Paul Craig Roberts, originally on NAM “USAWatchdog.com”. FPM discovered this alternative news media via “InvestmentWatchBlog.com”. Other NAM sources we found en route was OpenSecrets.com and PaulCraigRoberts.org. FPM have NOT exhaustively researched the independence of any of these information sources; maybe they are registered with the “Institute for Nonprofit News”. Dr Roberts’s credentials in career as a political economist are impeccable. As Assistant Treasury Secretary under President Ronald Reagan between 1981-82 he has the best perspective on World developments over the last 30 odd years to the present year 2015. Cover picture of his book below: 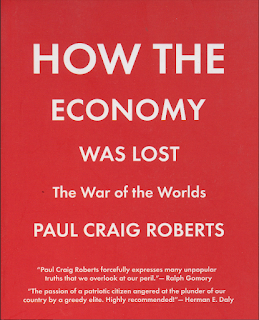 The public or professionals' informative value from the views of executive financiers "banksters" (or in wider industry of  CEOs and Presidents opinion) are of even less merit: as they generally are the paymasters and orchestrators of a self-serving corrupt crony capitalism. Their common interest is clearly unaligned with the proportionally bigger public at large. Yet using slick highly-paid under-the-radar PR-firms / media strategists / communications in the "dark arts"; and government lobbying to exact their bribed will in industry deregulation etc, towards ultimately lining their pockets, with trickle-down to their sycophantic cronies at expense of unsuspecting and yet trusting gullible public, we are.

FPM are not talking of systemic-wide corruption through their proverbial hats as gibberish rant! FPM principals have understood a similar broken state of capitalism leading up to and after The Great Crash 1929[1]. To validate our crony capitalism of bribes to politicians, in graphic table below we cite ONLY the bribes by the financial sector in the United States of America, referred to as Wall Street, over a roughly 10-year measurement period[2]. The financial sector invested more than US$5 bn in political influence purchasing in the United States over the last decade to 2008. Now just imagine what multiple of US$ dollars that was returned or begotten to the financial sector as payback! Absolutely a backhander or illegal payments for favours.


And now the interview discussing how the world economics and politics really does works, especially in the last 30 years or so, by someone who ought to know have been there at its instigation and observed the playout of that cycle, which is nearing its end, but not with old fashioned market volatility as we've had but with end of fossil fuels and United States Dollar debt:
[1] “The Great Crash 1929” 1954 by John Kenneth Galbraith
[2] "Sold Out - How Wall Street and Washington Betrayed America" March 2009, by Essential Information, Consumer Education Foundation, www.wallstreetwatch.org
Posted by KKSiva at 16:30