What the "SAC" Is Going On?

For FPM's enterprise entitled “No Smoke Without Fire: of Reputation Risk” we were reminded yet again that criminality is a servant of corporate enterprise. FPM joined-up thinking draws parallels from the widespread vogue of United States of America government enforcement prosecutions against financial and corporate crimes in capitalism.

FPM will further follow closely this and similar tax-fraud cases as part of widening the FPM's “NSWF:Reputation” template; which was initially honed on SAC Capital insider trading amid their litany of legal proceedings, as understated in the financial media yet aggregated by FPM to display the sheer "iceberg theory" extent of insider trading that remains concealed. And we only focused on one solitary hedge fund founded by Steven A Cohen with his initials SAC Capital ("SAC").. 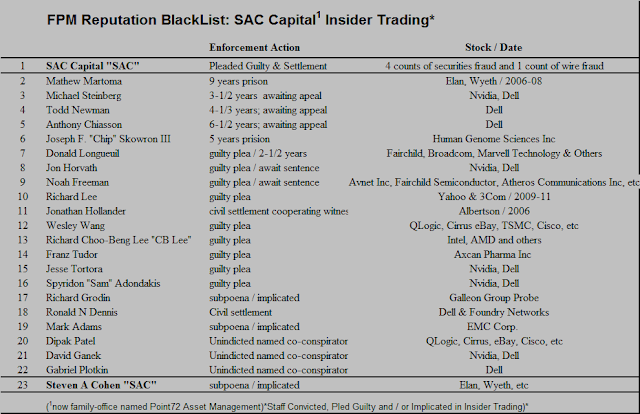 Remarkable that the FPM Reputation Blacklist or “Rogues Gallery” (shown above) is comprehensive with 20 plus insider-trading associated individuals. Compared to the pandering mainstream media (msm) accounts of only 8-10 criminally charged and convicted as one  time SAC employee. With intention to deceive public opinion and interest, downplaying illegality and criminality at SAC is an artifice of Mr Cohen's external public relations firm Sard Verbinnen & Co.  FPM list appropriately includes former or current SAC staff pleading guilty and co-operating with enforcement authorities, and those uncharged but implicated as co-conspirators in the “criminal club” cases. The mitigating factor is that staff turnover at SAC Capital, in line with other financial firms tend to be high, so association or links to a firm is exponential and inevitable, but their insider trading being synonymous with notorious ringmasters / hubs is unavoidable. For example, consider an FPM Reputation Blacklist for one time Goldman Sachs employees associated in insider trading and other securities fraud the list would be tediously exhaustive probably!
Bear in mind that DoJ and the SEC are boasting 85+ convictions or guilty pleas to-date since the crackdown began in October 2009. Also, as of October 23rd last month, SEC stated “…Galleon-related enforcement actions against 35 defendants.” And news typically report for a firm of “..Fourteen people pleaded guilty in the Galleon case, and at least nine others are charged”. Clearly, the numbers stack-up in validating FPM enumeration of SAC-connected criminality rather than msm financial press data.

Further, FPM list ONLY includes insider trading violations by one-time SAC Capital employees investigated, by the deliberately stymied and poorly resourced enforcement of the SEC. Remember that the SEC were set up as the police equivalent of the securities and investment industries. Their job is to enforce securities regulations and legislation – seemingly especially at lower ranking company men! To validate Steven A. Cohen as only ‘allegedly’ presiding over a “web-of-securities-fraud” and receiving an administrative “slap-on-the-wrist” by the securities regulator, despite the numerous foot-soldiers and lieutenants ensnared in multi-years insider-trading prosecutions, is utterly shambolic oversight and law court proceedings by the DoJ. We charge Eric Holder as the attorney general of USA. Our SAC-associated blacklist aimed at spreading historical knowledge or simply reputation is obviously even more exhaustive when including other types of securities fraud. An extended “Reputation Blacklist” of SAC-tainted individuals and firms, which FPM have compiled internally to assist external manager due diligence (available for a consultancy fee), for example includes publically disgraced Forrest Fontana in stock-shorting violation (more in “NSWF: Of Reputation”, a chargeable document).

The appalling journey of a 10 years’ probe into insider trading without catching few ringleaders is strong evidence that enterprise of a billionaire over-rides legal justice concerns in the modus operandi of capitalism. More alarmingly, as “FPM Reputation Blacklist” amendment proves, the public interest is only given propaganda lip-service by contrived and trite public relations communications and msm financial press. Such systemic imbalances and corruption leads to social disaffection and discord, perhaps explaining the strong raison d’etre of freedom and popular revolt movements gaining momentum globally, even heralding “Destroy Capitalism!” FPM’s shout is less radical but with similar aims: “Destroy Corruption of Capitalism”.

At the climax of US district court attorney Preet Bharara’s insider trading enforcement, if the “Unconscionable Mr Cohen” himself IS NOT criminally charged, while the firm bearing his name pleads guilty to criminality and settles for multi-billion dollars (US$1.8 bn plus legal expenses), then the attorney’s biggest scapegoats are Raj Rajaratnam of the Galleon Group and Messrs. Martoma and Steinberg of  SAC Capital. Now compare the 1980s insider trading triple scalp of Ivan Boesky, Michael Milken and Dennis Levine. Whatever the merits and demerits of the American Politico-judiciary system, and clever technical litigation by Mr Cohen’s defence, it is clear that political expedience and multi-billion dollars remuneration for the capitalists’ infrastructure of DoJ and SEC, won the day. Pity the Poor Man’s Pocket Aye! Mr Bah

For Mr Bharara efforts at recouping money largely for the USA Government and an incommensurately smaller portion to reimburse other disadvantaged investors and ultimately pensioners and other long-term savers, validates incestuous politics and capitalism. “Democracy” or the rule of society by the people is ultimately defunct and only a pseudo notion. Where are the developments in laws enforcement in the securities industry to expand enforcement in the wider public interest? In 1972 John Wells a New York lawyer, led a panel on enforcement issues, which resulted in the Wells Notice many corporate America and portfolio manufacturers know only too well. FPM has an “enterprising execution” from its 3-pronged process).

Whereas “Plutocracy”, an organisation of society by wealth, is clearly alive and kicking. Witness Mr Rajaratnam penalty fine of under US$100 mn and jail sentence exceeding 10 years, a near record prison term for insider trading; versus Mr Cohen’s record US$1.8 bn global plea agreement / “payoff” and NO jail time and perhaps a slap on the wrist and told not to do it again. Proof that criminality is a servant of plutocrats. In astonishment, FPM echo “What the SAC is going?”
Posted by KKSiva at 15:58