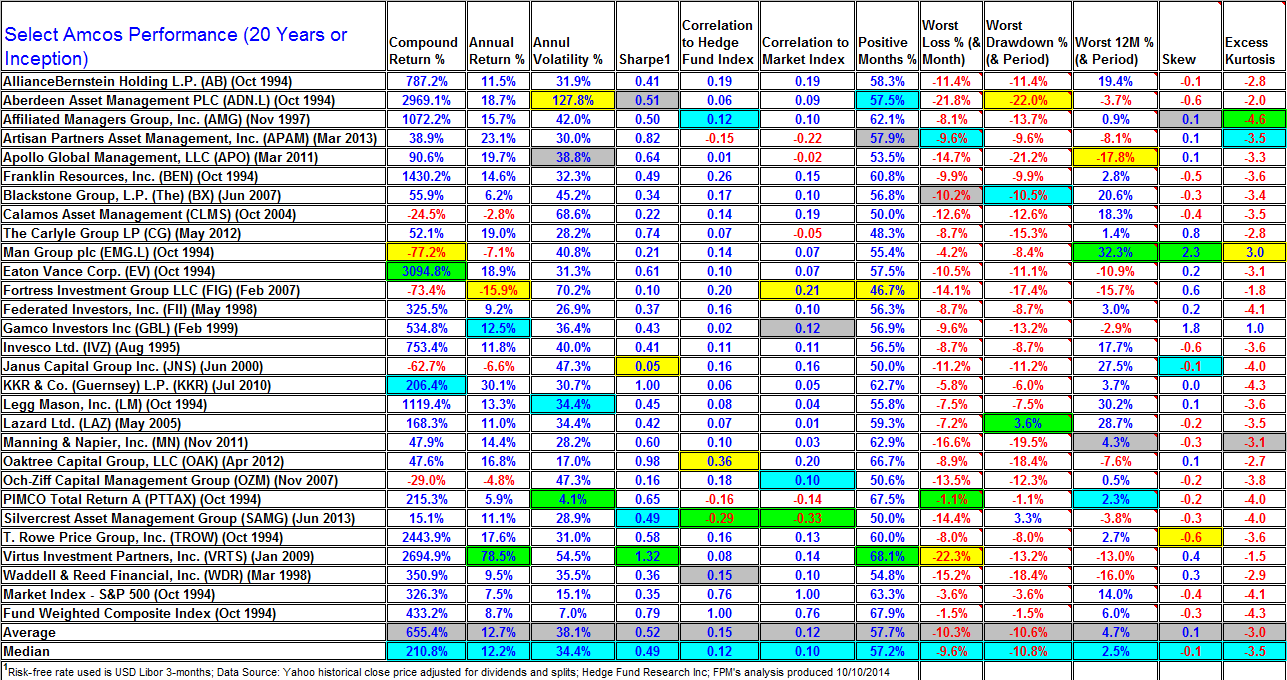 This research note is a preliminary study of listed asset management companies (Amcos). The ultimate aim is a process of selection for “FPM Amco Long/Short Recommendations”. An opportunity to get direct equity exposure to asset management companies (Amcos) during this general market correction in many global equity capital markets, particularly with S+P 500 at 6-month lows is the market timing under consideration. Also, we discuss the costs and benefits of investing in select FPM Amco stocks.

We believe record levels for equity benchmarks such as the S+P 500 closing above 2000 for the first time ever in August, augurs continued economic stability which was initiated by concerted global government stimulus. FPM analysis indicate ‘animal spirits’ will only be slowly painstakingly and enduringly restored. Whether that is a lull in perception about stagnant tepid global economies or an opportunity to exploit the trading volatility, we advise the real-money investors in deciding overall allocation strategies.
FPM’s repeated macro economic view is that we are in a “pause for breath” amid fundamental structural changes in social-ecological political and other spheres (listed in “FPM Risk Assessment Matrix” and also in our “Accumulating Risk Trends – ARTs”); and ultimately in financial landscape, not just regionally but also globally.

”FPM certainly believes in this probability of ‘multiple-dip recession’ cycle started in 2007-08.” From  FPM Jan’13: Investment Sector Outlook for 2013: “Credit is a Lover on the Re-bound?”

The State-driven economic policy and resultant macro fundamentals which have flummoxed many institutional investors (no less the famed and topical Bill Gross of Pimco Advisors!) in their prediction and interpretation ever since the “game-changer financial crisis”. Indicatively we may expect to know what the next seven years are likely to herald from the “easing off” of credit-injection reflation policy; excepting the chaos scenario outcome from extended and unprecedented national debt and global debt accumulation! This is the key to macro economic scenario analysis today. In regards financial capital, as FPM have propounded since July 2009, that we are in an era of equity markets characterised by side-ways trending benchmarks with bouts of volatility and a tentative secular uptrend. Given geopolitical risk considerations, policy manipulated markets, and other downside risks (See FPM Risk Assessment Matrix), FPM believe there is not enough market impetus or volume to send us off a precipice to a lower low in the capital markets benchmark, anytime soon, despite increased uncertainty in high volatility periods.

Before we pick the Amcos for the FPM Amco Portfolio we believe the general partner exposure is as valid as an investment in their underlying limited partner (LP) funds. Selecting appropriate sectors to allocate capital for speculative or investment purposes is shown in empirical research to be paramount to portfolio performance. So we have produced a select ETF constituent proxy of various asset class performances.

For all the greater transparency mandated by SEC regulation (such as expanded Form ADV and the exhaustive Form PF); yet NAV i.e. price history, particularly of alternative investment funds (AIFs) such as hedge funds and private equity funds, remain opaque. As might be expected for essentially still an over-the-counter OTC product structure, as compared with the long established staple of 401(k) pensions plans, the humble mutual fund. Aside of AIFs’ price-discovery issues, mutual fund prices do have greater price visibility and accessed via their ticker / monikers from public websites such as Yahoo Finance and Nasdaq.

For FPM’s 3-fold enterprise manifestation[1] agenda, we decided to take a proxy for the gamut of investment funds through their listed management companies – for which there is access to financial accounts and statements, as well as database of price history for research analysis.  While AMCOs maybe categorised as either predominantly applying “passive” or “active” management for the sake of broad distinguished identity. FPM enunciates the “convergence’ force as powerful. Then into further meaningful assessment of whether the management company is considered primarily as “traditional long-only”, “alternative investments” and / or “index trackers”

For this ‘top-down’ recommendation analysis of the listed AMCOs for buy-and-hold portfolios we selected those with pre-2000 vintage (i.e. those managers publically trading before and after Asian Financial Crisis of 1997-98 and TMT-Bubble of 2000).

For the ‘all-in’ SELL list we selected only those poor performing managers with over 5-years’ listed-price record. Again here we stress that this preliminary work is only intended as a top-down recommendation. Noticeably and unspectacularly the resulting list includes those managers specialised as alternative investment management companies - “AIMCOs”. The reasonable explanation for most of these alternative managers’ underperformance perhaps stems from the partial public listing e.g. Blackstone Group have only a 10% public float. This is in “FPM Alt Kind - M&A” terms due to distribution rights priority of founding managing partners over shareholder distributions on operating profits.

A prudent investor may suggest theses me-too newcomer ‘alternative’ listings are mainly a strategic phase acting mainly as an opportunity for the founders to cash-in a stake in their company via the initial public offering - IPO (and often a subsequent phase after a private stake sale for price discovery and market valuation purposes).

So the eventual or initial market price trading history having little reflection to overall book value or performance expectations of the firm. In fact, Blackstone Alternative Asset Management (BAAM), the division of the Blackstone Group (BX) which manufacture hedge fund investments confirm in their February 2014 presentation that “Valuations for hedge fund GPs do not reflect long‐term value”. This can be interpreted in two-ways: 1) no long-term value in investing in a hedge fund Aimco or 2) Markets’s valuation of Aimcos doesn’t reflect future expectations.

For Further Qualitative And Bottom-up Analysis:

Conclusion of our quant based preliminary ‘top-down’ recommendation of a select asset management companies and their fortunes for an investor in them.

FPM brand of fund analysis shows that an investment in traditional long-only asset management companies (Eaton Vance Corp. et al.) outperform those of relatively newly listed ‘alternative vintage’ of Och-Ziff Capital Management Group (publically est. 2007) and their brethren over the long term. Listed alternative investment management companies (“Aimcos”) are the relatively poor performing subset in the asset management industry. Och Ziff (OZM) is down 29% in dividend and split adjusted price terms from its public inception. While Eaton Vance (EV) is annualising comparable returns of 19% over the past 20 years.

Since not all breeds are made equal, of the Aimcos we noticed from our preliminary ‘top down’ survey of their quantitative metrics, we researched anew Virtus Investment Partners, Inc. (VRTS). This new Amco, which only publically listed in January 2009, had unbelievable (‘Green for Go’ Highlighted) total returns with dividend re-investment of 2,695% or 78.5% annualised. This naturally seemed bizarre when compared to other definitive Aimcos in that table above returning 15.7% and 12.5%, such as Affiliated Managers Group - listed Nov 1997, and “Gabelli”.
FPM already had coverage knowledge of Affiliated Managers Group and Gamco Investors Inc (GBL) (Listed Feb 1999).

Virtus Investment Partners, yet without the veritable ‘VIP’ ticker! is new on FPM coverage radar as a vivid example of how relevant bottom-up understanding complements top-down quant estimation. Virtus was founded in 1988, perhaps a phoenix rising out of the Black Monday Market Crash of 1987, but like Affiliated Managers Group, they maybe considered ‘Amco’ management company not unlike a multi-manager but with general partner relationships i.e. a platform for other affiliated managers under an umbrella label. For our full research report we reveal if Virtus are a business development company (BDC) category; like the coverage we initiated on Ares Management L.P. (ARES) of Ares Capital Corporation (ARCC)…

In FPM humongous SELL Recommendation[2] of Aimcos headed “Specialist Strategies (Noveau Aimco) – Switch / Sell”, we targeted Blackstone Group due to FPM coverage of their reputation risk from investor association with ‘guilty verdict’ institutions such as insider-trading Steven A. Cohen’s firm S.A.C. Capital (since re-branding as a family office renamed Point72 Asset Management).
“We were concerned that Blackstone, now an AIM category behemoth and industry bellwether, is not adhering to its founding reputation risk principles. A seemingly ardent principle to the partnership co-founder Stephen A. Schwarzman, from the days of his office-next-door association with Dennis Levine; a former Lehman Brother’s colleague who was central to the mid-1980’s insider trading crackdown. “Blackstone is sensitive to reputation”, was recited as a holy mantra to the author of this investigative research during a due diligence meeting in 2007 with the then head of asset allocation.” (Source: FPM’s No Smoke Without Fire! 22 April 2013)

Also, we were less than impressed with Blackstone’s total returns figures, up 55.9% since public inception in June 2007 or only 6.2% annually. Despite Blackstone’s division Hedge Fund Solutions or BAAM (mentioned above), reporting in their February presentation in Florida of 22% CAGR in economic income; we believe the predominantly private equity advisory business is reeling from low transactional flow, perhaps hampered by easy money preventing corporations from needing their buyout contravention…

[1] 3-fold manifestation: No Smoke Without Fire – Reputation Risk, M&A of the Alt Kind and Alternative-Mutual Convergence
[2] An analysis based cautiously on preliminary top-down quant observation of a select Amcos
Posted by KKSiva at 15:32