During the private equity leveraged-buyout boom and the housing bubbles in the and other developed countries, and up to the height of the financial crisis, demand for leveraged- and mortgage  loans came mostly from structured finance offerings such as collateralized debt obligations (CDOs) and mortgage backed securities (MBS). Since the 2007 sub-prime driven unravelling of structured credit portfolios, with inherent flawed model assumptions, the subsequent clearing of debt markets has been incessantly underway. The ‘workout’ in identifying fair-value of these hard-to-value assets, which had been battered in the ensuing ratings downgrade and plummet in mark-to-market valuations, is showing dividends.
As a turning point and until the sovereign debt turbulence of August 2011, there are both obscure and vivid examples of the clearing of credit market. Adjectives for loans, credit and debt have become prominent in recent financial vocabulary, with descriptions such as “delinquent”, “non-performing”, “in forbearance”, “distressed”, “credit quality” etcetera. The premise for FPM’s inflexion in credit assertion is based on interest rate and credit cycle and plethora of credit-related market activity.
Micro Workout Amid Macro Stability
The micro-economic aspects of asset bubble economies of 1998-2007 are and were being fixed amid macro-economic monetarist stimulus, introduced by the then chairman of the Federal Reserve, Alan Greenspan. Asset bubbles bursting, whether related to emerging markets-, technology / TMT, or sub-prime housing, inevitably leads to recession and recovery periods.  Recent stimulus included the massive re-capitalisation of banks to preserve their regulatory capital requirements from the effects of withering asset quality valuations in structured securities (and ‘ballooning’ notional CDS exposures – look out for “CDO vs CDS”, an FPM note to follow). The new paradigm of easy credit from central banks’ “pump and prime” such as low interest rates and government tax relief prevented asset bubble recessions spiralling into protracted deep ones while solvency issues were sorted at the micro level.
FPM has collated some evidences of active loan markets including the purchase, unbundling and selling of pooled loans, and higher recovery values. Also indicative of restoring economic order and confidence are the multiple legal cases surrounding mortgage securities mis-selling etcetera. Litigation and settlements may not seem a credit quality issue other than its confidence-restoration link to the structured securitization debacle. FPM’s insight suggests these litigation and resultant outcomes affect investors holding these mortgage debt or leveraged loan secuirities, at least their recovery values in situations of loss-making positions. Mortgage litigation losses remain a dark cloud looming over financial services. As is the impact of forebearance. The Bank of England warned in its semi-annual Financial Stability Report this year that it may explain the lower rates of arrears and repossession for homeowners in this recession than in the last (See FT article: Iceberg of soured loans hides true losses).

After the fire-fighting period post-Lehman 2008, the SEC started initial investigations into the mortgage-bond selling by suing Goldman Sachs in April 2010 over the Abacus 2007-AC1 deal. Then broad-based investigations and subpoenas ensued in the autumn / fall of 2010. The results of law suites, litigation and settlements are now unfolding in the 2H11; as are independent fresh cases such as the July 2011 lawsuit filed by China Development Industrial Bank. CDIB claims that Morgan Stanley "misrepresented the risks" of CDO called Stack 2006-1 Ltd.
Some of litigation workout examples augur mixed fortunes for indicted banks. In June 2011, it was reported that JPMorgan Chase agreed to pay $153.6 million to resolve US SEC charges that it misled investors in a mortgage-related CDO, named Squared CDO 2007-1, it constructed for Magnetar, an hedge fund. Similar settlement later that same month when Bank of America completed an agreement to pay $8.5 billion to settle claims related to subprime-mortgages securitization (via mortgaged backed securities). This last settlement represents one of the single biggest, related to 20 institutional investors including fund management behemoths BlackRock and Pimco. Clearly such steps, ‘clears the slate clean’ of the malfeasance in securitization and ensuing financial crisis. As caveat, this author’s optimism is tempered by headline risk of such reported settlements.

Stop Press: FPM told you so! As of 2nd of September 2011, Federal Housing Finance Agency of the US is suing 17 banks for losses related to mortgage security mis-selling. Adding to the current on-going market jitters, the 17 listed global banks including securitised mortgage players such as GE and Countrywide Financial and First Horizon National, had their stock prices marked down between 2 and 8 percent on the news. These traded lower due to additional liability to banks’ capital stemming from the potential new litigation losses (up to $20 billion mentioned) related to the selling of some $120 billion of RMBS.
FPM long-memory research reminds us that banks churned out $1 trillion plus of CDOs and the like. These structured ABS with multiple ‘tranches’ led to some $2 trillion of writedowns and credit losses for global financial firms since the start of 2007.
Also, since 2000 the leveraged loan market grew significantly, and at the end of 2007, the market for leveraged loans was worth $1,061 billion, making it the largest corporate debt market.
As for the biggest asset-play market, US mortgages not held by Government Sponsored Entities (GSEs) but in private mortgage conduits accounted for nearly $3,000 billion at the end of 2007. These non-agency MBS in the accounted for $1,800 billion at the end of 1Q2011, according to the Federal Reserve. Remember the total mortgage debt outstanding held by major financial institutions, Federal and related agencies and mortgage pools or trusts is $13,700 billion at end-March 2011 (similar in size to the entire US GDP).

The institutionally-held investments in securitised debt, rashly generalised as ‘toxic assets’, are being repackaged into simpler mutual fund structures (both closed-end and open-ended varieties). These portfolios’ constituents are primarily private-equity leveraged loans and/or securitized home equity loans with short- to medium-term refinancing instruments.
Indicative of credit workout, noticeable that in March 2011 Apollo Global Management, a top 5 global private equity firm providing loan-financing; and a large exchange-traded fund (ETF) manager Invesco PowerShares, both launched portfolios where the underlying is ‘legacy’ loan paper.
Apollo’s closed-end fund (CEF), a long-only mutual fund with limited issuance of shares and traded on exchanges, constitutes floating rate notes or FRNs.
FPM’s new-trend-notice reflects that FRNs have become “attractive option for refinancing loans”, as confirmed by Paul Hatfield on Creditflux.com. The pre-financial crisis model of borrowing short-term through asset-backed commercial paper (ABCP) market, and lending / investing in longer-term higher yielding assets (such as CDOs andCLOs), is a model that broke down during the financial crisis, by its functional seizure.
Invesco Powershares’s offering became the first ETF for corporate bank loans. The ETF tracks the S&P/LSTA US Leveraged Loan 100 Index, a basket of the 100 largest and most liquidly traded loans.
Investors have allocated cash into mutual funds that buy such loans, increasing the assets managed to $37bn as at February 2011, according to Lipper the fund tracker.
AXA Investment Managers in Paris, with a division specialised in structured credit, were one of the early users of the CEF structure for ABS investments via its Volta Finance (ticker: VTA). Which invests in corporate credits, CDOs, ABS, leveraged loans, and infrastructure assets. Since the launch in October 2006 pre-crisis and the systemic crash in 2008 there is an up-trending price recovery (See Chart 1). Another listed CEF, Tetragon Financial Group (ticker: TFG), launched in 2007 also experienced similar price slump in the 2008 but has bounced back stronger (see Chart 2). Further primary fund analysis is required to understand the performance difference, whether due to better underlying loan picking or refinancing etcetera. 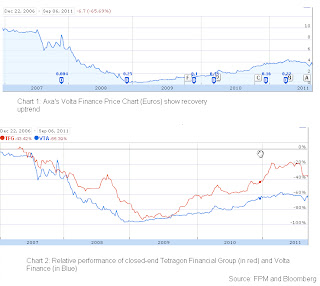 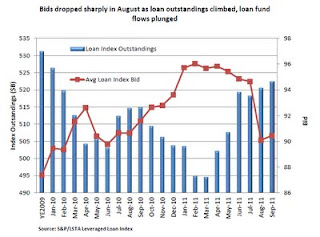 Chart 4
Addendum
Lloyd Bank (UK) is accelerating its sale of bad commercial property loans. In 2010 it sold about £4 bn of real estate loans through "forcing an administration or encouraging and investor exit". In May Lloyds  marketed its first sale of a portfolio of distressed property assets, making £1.8 bn in 1H11 propety disposals.
The Bank still has about £23.7 bn of troubled real estate loans, while Savills estimate about £350 bn of outstanding debt in the UK commercial property market. The sale is expected to managed by  JPMorgan Cazenove and is currently in early stages.
Posted by KKSiva at 16:17