The French Presidential Election of Marine LePen threatens the European Union project as much as Brexit already has done. We here at Fund Portfolio Management – FPM vehemently believe that this western phenomena of populist activism will garner a victory for the anti-EU candidate of Marine LePen.

Without going into how the historic 2nd round run-off between two political outsiders came about, or even understanding French politics nuance it is fair to say France is in desperate need of “change”.

Economically, and in other respects like eradication of its historic socialist values is at stake. Its national debt to gross domestic product is a staggering 96%. What does that mean? This all-time high figure of debt to GDP reached in 2016 means France's taxpayers i.e. the average citizen of that country will struggle to pay “national” debt for years to come with “austerity”. The chart below shows how the debt of the country has ballooned beyond incredulity since the US-led financial crisis of 2007-08. 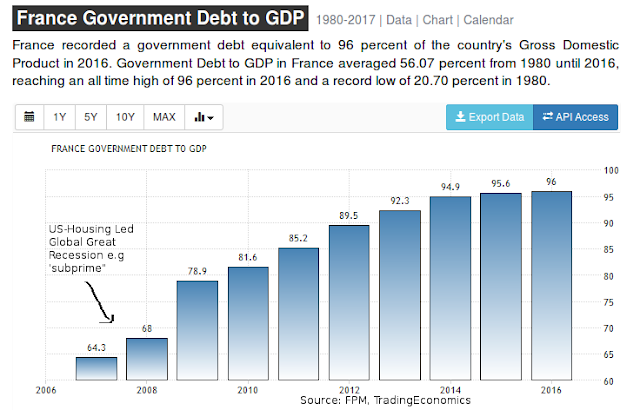 The change that we believe the country needs is to adopt its own currency, and take control back of its sovereignty. So getting out of EU is essential! Being in the EU allowed France to exceed the regional union's own prescribed debt management levels; while hampering it's ability to devalue it currency and export itself out of debt, in the recent past since the financial crisis. That is, growth in its economy has been anemic to non-existent due to its hands being tied by being in the EU.

Controlling its economic levers of power, like currency alone will not fix the economic despair that the nation faces; other factors like being able to set it's own interest rates with conditions for limiting  migration should help contain the outflow of currency. This strict border-control aspect IS NOT possible under the EU rules of freedom of movement of people and  Shengen agreement; and which every student of economics would understands as a closed-economy i.e. being able to prevent money flowing out of a system. Unwinding an association of 40 years or so is not difficult, as UK proved in recently triggering Article 50.

We strongly believe the phenomena of “globalisation”, as defined below, is singly and solely the reason for France's woes. Remember that the world globalisation did not even enter the lexicon before the 1980's. As the dictionary of those times describe what it ORIGINALLY meant, and how it entered the business then popular language vocabulary, as a good and positive phenomena. 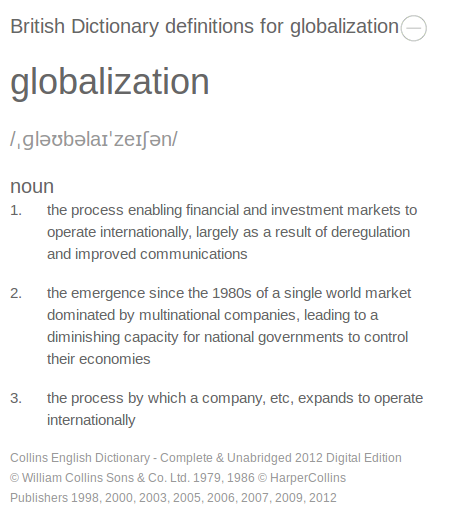 Nationalism and protectionism as prescribed by the National Front candidate Le Pen is a MUST solution NOW. Unless of course collectively the EU can have the power to default on debts or destroy debt by allowing inflation, it is a slow road to third world country status. The strong nations in the EU bloc like Germany and Switzerland, which was originally started as an European Economic Co-operation treaty, will NOT BACKSTOP France if it collapses (fails to repay debts) under the strain of its national burdens. The Nation's debts are with countries that have large foreign currency surpluses, like its close neighbour Germany in the EU; and broader countries like China, and the oil states. This link here will take you to a France and other indebted nations' woeful economic statistics.

Like its other close neighbour across the Channel, United Kingdom who exited the EU on epochal day 23-June-2016, even though they controlled their own economic levers to a large extent, France has little other options than to leave the Union. Maybe France is happy to part of larger union like Scotland with Britain and others forming the UK. That union is 300 years old and visibly at least a healthy marriage, despite occasional public remonstrances! Or perhaps, if France exits, the EU will reform or be rolled-back to be once more an European economic cooperation area, without the the binds of a currency union, and its "Euro Zone".

The speculations are limitless though one thing is certain, come May 7th, the day of the French Elections we may herald “Vive La France” but not “Vive La Republic” as well! Why? Because France would affirm itself as State of Europe in federalist plans, if it elects Emmanuel Macron instead of the nationalist candidate. For fear of over-simplification a republic is independent of a monarchy. And as "Brexiteers" know, being answerable to an unelected European Commission is tantamount to reign under an absolute ruler or de facto monarchy (of bureaucrats and capitalists).
Posted by KKSiva at 16:33